Muhammad Yunus, Banker to the Poor 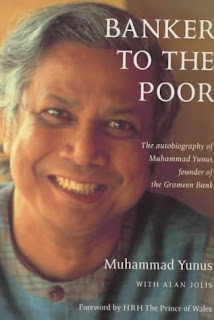 In theory, Banker to the Poor is an autobiography of Muhammad Yunus, the founder of Grameen Bank and the man who developed the concept of microcredit.

In reality, it's a 342 page advertising brochure for the Grameen idea.  Oh, ok, it does contain some autobiographical notes, but it's not a book about a man, it's a book about a corporation.

Grameen idea looks lovely when Mr. Yunus presents it.  Empowerment to the poor, horizons growing, hard work, wonderful results, global fame, etc. etc.  The picture is so glossy, that I found myself asking again and again - where's the dirt?

Banker to the Poor reads like a sales pitch:  it's designed to get you to buy the product.  In the world of bullshit advertising, that instantly puts me on alert.  I can see what the author says - but what is he silent about?  Where's the small print?  There's slightly too much sparkle in this picture, too much glitter and gloss.

I still haven't decided whether the idea of microcredit convinced me or not.  I am all for self-employment - in fact, I deeply believe that this is the only way to go if we want a happy, functional society.  On the other hand, words like 'credit is a human right' make my hair stand up in horror.  Credit, a human right?  Enslavement to a bank from the very bottom to the very top of the society?  Shouldn't we instead strive for a world where it is a human right to live and grow and develop without the need to borrow money from anyone?

I respect all the good works of Grameen (and Grameen-like) organisations, but I don't think this is the way to go.

Still, if you want to learn how microcredit works (at least in theory), Banker to the Poor is a good source.