Aldous Huxley, The Olive Tree and Other Essays 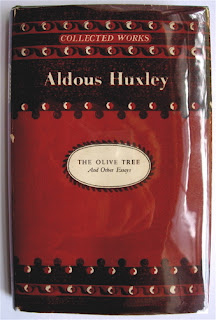 Another essay collection ticked off my list.  And because it was written by Huxley, I almost salivated at the very sight.

I am terribly impressed by Huxley's writing.  Of all the prophetic visions that passed through my reading list, his Brave New World is definitely the most accurate one.  I hoped his essays will prove just as stunning and to begin with my expectations were adequately met.  At first, I kept on exclaiming 'Brilliant!' and 'The man was a genius!' - ask my partner if you don't believe ;) - but whoever put The Olive Tree essays in the order they are presented, he or she certainly didn't save the best for later.

I loved the first and the third piece in the collection - they are full of oh-so-Huxley-ish comments on contemporary reality (and if his words were true in the early XX century, now they ring only truer).  He explores the power of words and the ways the words can be manipulated, he analyses the idea of power itself and its consequences, all done in elegant style and with impressive clarity.  I adore the way he sees through mechanisms of advertising and all sorts of propaganda.  Oh yes, Huxley on society is powerful, even breathtaking.

But...  Huxley on literature?  Huxley and biography or even *gasp* travel writing?  Nah.  Not for me.  I'm not saying the rest of his essays is bad, just...  uninspiring.  And from this particular author - I expected more.  Much more.  Because I know that he can deliver.