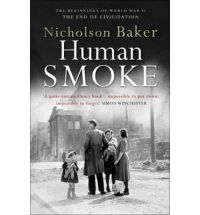 Shocking title, shocking book.  I actually chose it only because it promised 'controversy' on the cover and well - it delivered.  I can't imagine any politician reading Human Smoke with pleasure...   But let me start at the beginning.

Human Smoke is a World War II book.  It describes years leading to the conflict and the actual war time up to the end of 1941.  Yet, it is not a historical narrative, not as most people understand the term.  It's a collection of press releases, diplomatic documents and diary excerpts.  Baker doesn't add any commentary with his own words, he allows historical sources to speak for themselves.  I'm sure he chose his material in order to create the particular picture, so his objectivity may be questioned, but nevertheless the picture is striking.  I presume his sources are authentic (check some 80 pages of detailed bibliography at the end of the book if in doubt) and if it depended on me, every child would be made to read the book at school.

Popular image of the World War II tends to be rather shallow, distorted - Allies, the good guys, won the just war against evil Nazis.  Hooray for our heroes, for our brave war leaders, our excellent war effort...  Yet, the more I learn about the war, the less clear-cut the picture becomes.  Human Smoke added a handful of new doubts to my already subversive image of the war activities.  Let me share some things I've learnt:

- Germany wanted to get rid of Jews from German territory - true, and ugly too.  Few people know that their first plan to achieve this was to force them to emigration.  None of the 'good guys' agreed to take them in.

- the war was preceded by multiple peace initiatives, demonstrations, manifestos, publications - none of them was taken into consideration

- when people of Europe were dying from starvation by the million, war leaders (including Churchill and Roosevelt) were being driven around in private trains, fed with sirloin steaks and brandy

- speaking of brandy, Churchill did not abhor a drink during the course of his duty.  Actually, he was proverbial for his love of strong liquor.  It surely helped him contain aggression...

There's more, but I don't feel qualified to make public judgement based on one book (plus, I don't want to ruin your pleasure of reading it).

One thought can't leave my head after reading Human Smoke:  everyone who shouts 'war!' should be sent to the front.  Cheerleading a nation to a military conflict and watching it from a safe office/mansion/headquarters many miles away while unwilling children die on battlefields is not right.  Whether you are a politician, a writer, a philosopher - if you vote for war, go and experience war with your own precious self instead of jailing draft resisters.  Ok?

I was going to write a book review, and it turned into a political manifesto.  THAT'S now good the book is.
Posted by Bookworm at 20:45