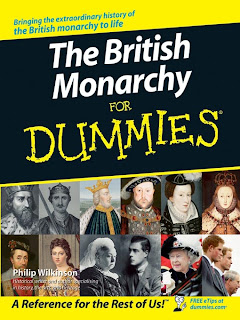 Ah, the famous 'for Dummies' series.  I've always avoided it like the plague, but something tempted me to pick The British Monarchy for Dummies on my last library trip and I was pleasantly surprised.

Sure, it is written in REALLY simple English.  Sure, it is full of tiresome repetitions (in case you didn't want to wreck your brain with reading the whole book) and Philip Wilkinson, the author, is guilty of a factual error or two (I spotted two, but it's possible that the editors are to blame, because the mistakes were rather silly), but overall, it was actually fun to read.  Especially compared with high-flying, snobbish prose of A.L. Rowse from the previous position on my reading list.

Whatever else can be said about The British Monarchy for Dummies, it sure as hell makes the maze of kings, queens and other royal personages pretty navigable.  It explains clearly who is who, attaches some colourful anecdotes (not necessarily true, but it doesn't claim them as such and good yarns are great help to memory) and it is not above a joke or two, or at least some not-exactly-respectful language.

Three hundred pages do not provide a lot of space for covering such a vast subject, so out of necessity the narrative is rather sketchy.  Fair enough, if you are not too well accustomed with British monarchy and want to ingest some basic information (because of being a teenage student, for example).

Fun to read and a very good starting point to discovering all the secrets that the annals of British royalty hold.