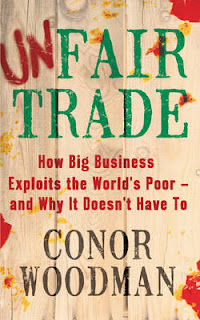 Have you ever looked at the Fairtrade logo and wondered how fair the deal really is?  I have.  I approach all labels with deep suspicion and Fairtrade is not an exception here.  One reason: how do I know that the lovely PR campaign has some substantial backing in the real world?

The answer is simple:  I don't.  Not without travelling to Africa, Brazil or anywhere where cocoa/coffee/sugar/whatever is produced.  As I obviously can't afford that, I'm expected to trust the labelling organisation to do the checking for me but frankly - in the world of bullshit marketing I'm not likely to rely on honesty of ANY organisation.

Woodman's Unfair Trade originated from similar thoughts, but unlike me, the author could and did travel around the world to see for himself.  Nicaragua.  China.  Laos.  Democratic Republic of Congo.  Afghanistan.  Tanzania.  Cote d'Ivoire.  (How's that for extreme tourism, Mr. Chuck Thompson?  If this remark is unclear to you, dear reader, travel two posts back and all will be revealed :) )

Each of the visited destinations has its own set of social/political/economical problems.  Sure, the pressure for ethically produced goods is more and more visible, customers simply don't want to sponsor robbery and slave labour.  The question remains - can a fair trade logo really relieve poverty, exploitation, dirty dealings?  Or do we just treat is as a conscience tax, an excuse not to care anymore, not to dig deeper?

Unfair Trade provides some interesting information about the inner workings of the Fairtrade certification system.  Ultimately it leaves it to the reader to judge the fairness of the deal.  I, for one, was disturbed, but not really surprised.

Obviously, Woodman's book only skims the surface.  Exploitation of the gap between developed and developing countries is a complex problem and no one could fix (or even present it properly) on two hundred pages.  Still, even this slim volume has the potential to make people stop and think for a while before they fill their weekly basket.  That's better than nothing.

Ultimately, Unfair Trade claims that only the big businesses can make real difference to the grim situation of the Third World producers.  I deeply dislike this conclusion, but I also fear Woodman might be right.  I can't quite see corporations suddenly becoming the guardian angels of social welfare and the whole idea of corporate scraps being thrown to the poor in exchange for glowing PR makes me nauseous, but...  Even scraps can have value for those who have next to nothing, and when you're hungry, you'll take any deal.  Judge it as you will.