Dervla Murphy, Race To The Finish? 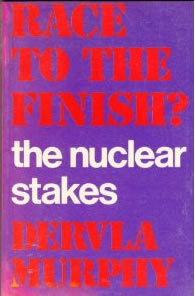 Unusually for Dervla Murphy, Race To The Finish? is not about travelling.  This time her activist's soul prevailed so the book is entirely about the Big Issue, i.e. nuclear energy.

Unsurprisingly, Dervla is firmly anti-nuke.  To her, potential hazards far outweigh potential benefits and Race To The Finish? is pretty much a collection of arguments to support this belief.  The narrative is passionate;  not as fanatical as it could have been, but fiery nevertheless.  Well, it's only logical.  We're talking nukes here, the technology with a potential to make our planet uninhabitable.  NOT feeling strongly about such matters would be at least ignorant (although the first word that came to my mind here was 'pathological').

Clearly, Race To The Finish? was not written with an eye for a spot in the global literary canon.  The book is full of time-sensitive data and since it was published in 1981 it now reads more like a history than call to arms.  I strongly suspect that writing this particular piece was purely an act of conscience on Dervla's part - a phenomenon to admire, if only for its rarity value.

If nuclear energy looked dangerous in 1981, how much worse does it appear today?  The Three Mile Island accident features largely in Murphy's book, but at the time of writing Chernobyl and Fukushima were still far in the future - not to mention a probable range of smaller scale 'mishaps' that the public was never told about.  If Dervla was to write a sequel today, how much scarier would it be?

To tell you the truth, while I much appreciate the author's adding ideological three pennies to the debate, I still prefer her travel writing.  Acidic rants about social ills read much better when they are set in exotic scenery :)  Anyway, Race To The Finish?  is full of figures, names, dry statistics etc.  I understand the 'boring' part was necessary for the book to achieve its purpose but still...

On the other hand, the scientific minds out there might enjoy it more as it is.
Posted by Bookworm at 21:51