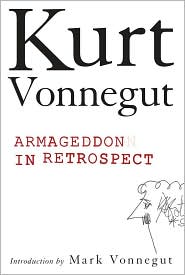 I was going to start this post by comparing Kurt Vonnegut to Pepsi.  As in - big, recognizable brand, high quality product etc.  Then I thought - no, Pepsi is not a good idea, too much pop culture and too little class.  I'd need to settle for a more elegant beverage, coffee perhaps.  Trouble is, I don't really know any extra posh, generally recognizable brand of coffee (apart from the one procured from cat shit, but I'm not going to compare anyone I like to THAT).  Moral of the story is that I'm not really good in drink metaphors.

I've never met a book by Vonnegut that I didn't like.  I've read quite a lot of them, years ago, and I remember them as funny, enjoyable and as far from sugar-sweet as physically possible (which is the number one compliment on my list).  His writings are dark, rather pessimistic and sometimes heavy like hell, but they read like a dream and make you laugh.  I never could stop myself from reading bits aloud to people around me - they were so good I simply HAD TO share them (besides, if you roll on the floor with laughter and don't tell anyone why, people tend to look at you in a weird way - consider yourself warned).  So yeah, when Armageddon in Retrospect landed on my shelf, I was quite looking forward to the moment when I could finally give it some attention.

By the time I had reached page 5, I laughed out loud more than ten times.  This doesn't happen very often, and it hardly ever happens when I'm reading foreword.  This particular preface was written by Vonnegut's son  (because Armageddon in Retrospect was published after Kurt Vonnegut's death) and - call me a heretic if you want - it was the best part of the book.  What followed was far more serious.

Armageddon in Retrospect consists of thirteen brief pieces, mostly short stories, but also a letter to his family and a transcription of a speech.  The book is described as 'writings on war and peace' and indeed most of the stories are set in WWII background, but Vonnegut doesn't spend much time commenting on war itself.  He writes about people who are forced to live and survive in wartime and while you may say it boils down to the same thing, I liked this subtle shift of focus.

The stories themselves are unsettling.  Happy end doesn't really apply.  Not that they end badly - Vonnegut is simply too close to depicting the reality as it is to make use of such an illusive concept.  Black and white rarely show up in real life and it's highly gratifying to see this mirrored in literature.  Bombing of Dresden comes up in more than one story (Vonnegut survived this catastrophe), so if you liked Slaughterhouse-Five, you can expect to enjoy Armageddon just as much.

I surely enjoyed it immensely.  I gulped the book down in about three hours, which gives you two important bits of information:

1.  Armageddon in Retrospect is quite a short book, 232 pages of rather large print interspersed with graphics (well, some people are REALLY scared of thick volumes).

2.  The book is damn hard to put down.  Can I recommend it better than that?
Posted by Bookworm at 03:19