John Simpson, Not Quite World's End 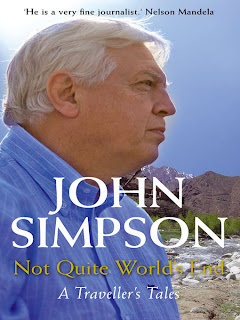 To say that I was pleasantly surprised is to say not enough.

I chose the book rather randomly, in the 'educate myself' mood and opened it more with the sense of duty than anticipation...  and stayed gripped from the first word to the last.  Interesting, well-written, world-conscious account of a journalist's life?  Yeah, sure, but it's still not enough.  Touching story of personal tragedy and joy?  Surely, but...  A behind-the-scenes peek at the BBC world and some political storms of our times?  Yes, that too.  A collection of travel/politics essays, presented in easily digestible form?  Again I have to agree.  Not Quite World's End is all that and more.

I don't know Mr Simpson from the TV (being blissfully free of this hypnotic curse of contemporary times), I don't recognize him either as a celeb or a professional.  I shall now.  If I ever come across something else generated by his pen, I'll read it too.  I know nothing of his other works, but after Not Quite World's End I'm happy to risk checking them out.  I'm not quite sure what charmed me so much in the book, if I was to point my finger to one single feature I would probably have hard time doing it.  Yet I was glued to each of 450 of its pages.  If this is not good writing, then I don't know what is.

Subject-wise it's not too original.  Iraq (and the rest of Middle East).  Japan.  South Africa.  Congo.  Balkans.  Anywhere that a war correspondent can report from.  Yet, Not Quite World's End is not quite reporting, not really.  It a cross between essay collection and anecdote treasury and well...