Neil MacGregor, A History of the World in 100 Objects 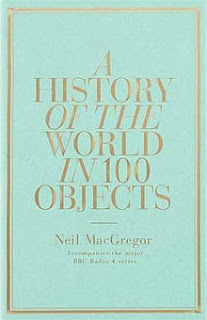 Ok, ok, just kidding, I will tell you something more.  Even though 'brilliant' would really be quite sufficient.

I definitely didn't expect it when I picked the book from library shelf.  It's a thick, brick-like volume and the images are not too striking at first sight.  I liked the concept, so I decided to give it a go, but to be quite frank - I didn't except much.  I thought it will be a series of boring lectures on items no one has ever heard about, something that only an art history freak would enjoy.

A History of the World in 100 Objects originated as radio broadcasts for BBC and you made have heard (of) it before, especially if you happen to live in the UK.  I haven't, but if I ever have a chance, I will definitely listen to the spoken version.  In fact, I'm seriously considering getting a list of BBC book publications and reading it A to Z - all the BBC books I've read so far were far above average.  And no, BBC does not pay me a penny for this glorification (although, if it wished...  haha).  They are just damn good, ok?

Back to the book.  The title is self-explanatory.  What it does not suggest is the extreme vividness of the book's language, MacGregor's extraordinary talent to actually bring you back to a particular time and place without using too many words or overwhelming the reader with dry facts.  I also enjoyed his elegant treatment of 'touchy' issues - whether political or ideological.  For example, the 100 objects are all housed in the British Museum (MacGregor is its director), but come from all over the world and some - yes, me too - could ask if they should be there at all.  The author negotiates this murky terrain with skill and diplomacy, not ignoring the debate, but not becoming overtly militant either.

Read the book and decide for yourself what it is.  I can only tell you what it certainly ISN'T - it is not a dry treatise for professionals or maniacs only.  Oh, and do not fear its encyclopedia-like appearance.  Half of it is pictures anyway :)
Posted by Bookworm at 02:04