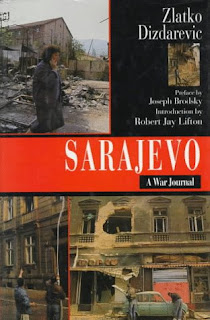 As promised, here's another look at literature written from besieged Sarajevo.

Sarajevo - A War Journal is on some deep level the very same story - a tragedy of living in a bombarded city.  But it is written for a very different public than Goodbye Sarajevo's.  From what I gathered, it was originally published in a periodical column for a Sarajevan newspaper, during the time of conflict.  Well, you can guess this much after reading the book - regular length of chapters and rather strong propaganda notes give some hints here.  Still - I liked it.

Dizdarevic's book is not nice.  His opinions are not nice, kind, polite, just the opposite.  He expresses hatred, rage, helplessness, cynicism - not pretty, but completely believable in circumstances.  He's being venomous, hurtful, intolerant, definitely unlikeable from time to time.  That's why he also appears authentic.  Somehow, I don't expect people living through a tragedy to be likeable.  Why on Earth should they be?

Personally, I found Dizdarevic's barbed, opinionated style of reporting rather refreshing.  I still don't consider his account the ultimate truth, but I doubt I would label anyone's version as such.  I can say that Sarajevo - A War Journal is mature, well-written and very moving at times, with its strange mixture of despairing cynicism and rough kindness.

Not life-changing, but definitely worth reading.
Posted by Bookworm at 21:35