Dervla Murphy, The Island that Dared 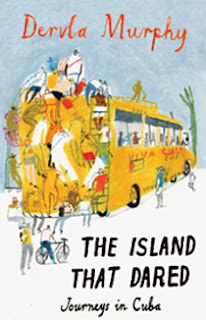 By now, I should be quite tired of Dervla Murphy, shouldn't I?  The Island that Dared is the fourth book by her pen I've read now, within really short period of time and, aside from destination, the books do not really differ much one from another.  They are all opinionated, colourful, controversial and absolutely delicious.  I'm not tired, I want more.

What 'island' are we talking about in this case, and why is it so 'daring'?  While it is easy enough to answer the first question (Cuba), the answer to the second is rather complex and you have to read the book to find it out (or possess some political knowledge gathered elsewhere).  To whet your appetite, I'll tell you only that The Island that Dared is very political, but definitely not politically correct.  Go, Dervla!

Cuba according to Ms Murphy might surprise you, especially if you live on the 'Western' side of the globe.  It definitely surprised me, but only in an inspiring and invigorating way.  Now I want to visit Cuba one day, no, 'want' is too mild a word, I'm aching to visit it.  The ache will surely wear off soon, with time blurring the effects of passionate prose, but the dream might well remain.

If I ever were reckless enough to form a political opinion based on one book, I would surely became a Fidel-supporter after The Island that Dared.  The Cuban (ex?) dictator, so demonised in the Western media, emerges from the book's pages almost unrecognisable.  Cuba's scientific and social achievements are deservedly praised, but what strikes me most is (if Dervla Murphy is to be believed) Cuba's attitude to money.  It seems that the world can still boast of places where cash is not the prime mover in individuals' life.  Hard to believe, but if true - I want to go to Cuba!

A fair warning:  if you are a big-time fan of corporate lifestyle, you might not enjoy this book (unless you can shrug off huge amount of criticism).  Ultra-nationalistic Americans might also feel offended.

I feel tempted to say something along the lines of 'if you have any sense, you will love it', but that would be a nasty piece of mental bullying.

I loved it.  You make your own mind.