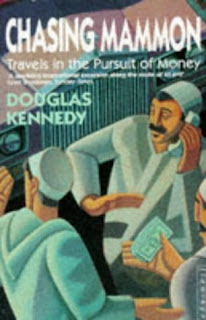 Travel writing with money-making as a leitmotif?  The very idea intrigued me.  That's why my most recent library hunt yielded, among other titles, Chasing Mammon - Travels in the Pursuit of Money.

The formula for the book was simple:  Douglas Kennedy travelled to the world's busiest financial centres and published his observations in a neat (if rather skinny) volume.  The journey starts in New York and ends in London, with visits to Morocco, Sydney, Singapore and Hungary in between.

When it comes to reporting style, Chasing Mammon is pure travel writing.  Moving from place to place, encounters with colourful locals, reflections on differences and similarities between Home and Away - it's all there.  Storytelling, if not the most inspired I've ever seen, is engaging and smooth.

Kennedy is not out to ruffle feathers.  His opinions are politely neutral, areas which might spark fiery debate carefully avoided.  Rare judgements are mild and conventional.  I find this somewhat disappointing - compared to (e.g.) combative activism of Dervla Murphy, Kennedy's propriety is simply dull, but I allow for not everyone agreeing with my tastes.

One major fault:  Chasing Mammon was published in 1992.  Had I noticed it in time, I wouldn't bother reading the book at all.  Financial markets are a topic with an extremely short use-by date.  In a fast changing world of money-making two decades equal eternity.  Still, you may want to check it out for its historical value...

To tell you the truth, I was not impressed by Kennedy's publication.  The idea was brilliant, the execution unremarkable.  What a shame.