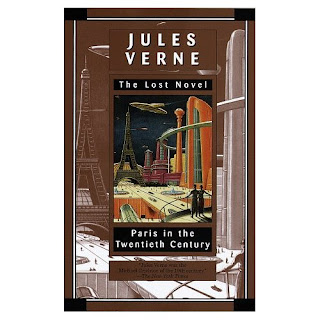 Jules Verne has a reputation for predicting the future.  You surely know at least some of his books, which tend to hang somewhere between science fiction and children stories.  I've read a few and quite enjoyed them, so when I saw Paris in the Twentieth Century on my library shelf I didn't hesitate too long before grabbing it.

The book remained unknown until 1989, when it was accidentally discovered by one of Verne's heirs.  It became a small-scale publishing sensation some years ago, marketed as 'the lost book' of the great writer.  Is it worth the fuss?

There will be no suspense building.  If you ask me, Paris in the Twentieth Century is no big deal.  Easy to put down - it took me some days to get through it, because after a few pages my attention inevitably drifted somewhere else.  I believe it was written sometime at the beginning of Verne's career, and that sort of redeems him...  But in this case he definitely does not land on my list of the best books of all times.

One thing, though, remains typically, impressively Verne-ish - his ability to predict the future.  His Paris of the future is a grim place.  It is also strikingly similar to some aspects of today's reality:  money is the absolute ruler of the universe.

If you want to see how joyless life is when money-making becomes priority of human kind, do read the book.  As a warning.
Posted by Bookworm at 21:08