William Manchester, A World Lit Only By Fire 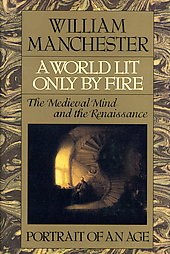 History books are my latest fixation.  I have this little fantasy of reading through the history shelf in my library, from A to Z.  No, I don't honestly expect to ever make it happen - which, I guess is a compliment to the library - but hey, wouldn't that be something to be proud of?

Anyway, I've been reading a lot of history books lately, with medieval history spontaneously becoming my main focus for now.  Hence William Manchester's A World Lit Only By Fire.

What an attention grabbing title, wouldn't you agree?  The same can be said of the book, and it's up to you whether you want to treat it as a good or a bad thing.  Let me explain.

I'm all for readable history books (Norman Davis being the prime example here) but A World Lit Only By Fire does make me think of a tabloid and somehow it didn't agree with me very much.  The basic facts seem to be generally correct, but whenever there's a good story to be found, expect Manchester to present it as a fact, regardless of any doubts voiced by historians.  After all, claiming Robin Hood and King Arthur as real historical characters makes a much better tale than explaining all the pros and contras.

This approach can be seen throughout the book - quick judgement in favour of a good story, especially when it comes to describing people.  I don't know my friends so well as Manchester seems to know people like Magellan.  He's surely very knowledgeable when it comes to 'what should have been done' - for example, he seems to be quite certain who to blame for Reformation and I dare say most historians would argue with him on many points.  In short, facts are served in a thick sauce of opinions.

Sure, even historians are entitled to opinions, but they tend to mark them as such.  'It is my belief...', 'all sources seem to point to...', 'my theory is...' are only some examples of useful phrases that could be employed here and I would have enjoyed A World Lit Only By Fire much more if they were.

What else does a good story need?  Sex and death are another safe (and tabloid-ish) bets, and Manchester knows it well.  Immoral behaviour of medieval popes?  In detail.  'Bathroom language' in Martin Luther's writings?  Quoted at length.  You notice the trend.

Having said all that, it IS a damn well written story.  While I would hesitate before adding hi- to the word, as long as stories go, this one is brilliant.  A good position to recommend to someone who wants a taste of medieval ages but has no academical training to get angry by the inconvenient details.  I imagine teenagers would love it and who knows, they might even grow to like their history lessons this bit more (unless you're of puritanical persuasion and teach your children that babies and storks come together).

Manchester is not a historian and he clearly says so in the preface, so I guess only my library is to blame for placing his book in the 'History' section and ultimately, for my disappointment.  You have been warned, so you may just as well give the book a chance.
Posted by Bookworm at 02:15