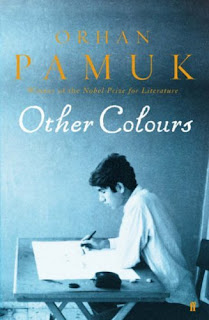 If I had to pick a single writing genre that I love best, I would probably say it's essays of every shape and size.  Somehow, whenever I pick a tome of essays, it doesn't much matter who wrote it.  I'm happy like a guinea pig anyway.  Fiction may convey truths disguised as lies, popular science may teach and dazzle, but nothing compares to musings on life, death and everything else.

Yes, you've guessed it, Other Colours is a collection of essays.

When it comes to quality of writing, Nobel Prize tends to be a good indicator of what to expect.  Pamuk won the prize for his Snow, although if it was up to me, he would have got it for Other Colours.  I've read Snow and I've read My Name is Red, another book of his, and although both were pretty enjoyable, I didn't devour them as I did the essays (i.e. in one sitting - all four hundred pages!).  Pamuk's writing is not the easiest thing in the world, he steers sharply towards abstracts and poetry, but he sure can write.

If I was to pick one thing I liked best in Other Colours, it would be numerous glimpses of the writer at work.  There are screenshots of daily routines, thoughts and motivations, in short - stuff that every writer will be familiar with.  A glorious opportunity to learn from the best, dear fellow penpushers :).

To keep the balance, I also need to get picky and complain a bit about one detail that I didn't like at all - book reviews.  There are quite a few literary essays, mainly concerning the classics - among others Dostoyevsky, Nabokov, Camus, Rushdie - but well...  can I share one of my pet peeves with you?  I totally hate it when book reviewers (even if they are distinguished and Nobel-decorated) presume to know an author's mind better than the author himself. How the hell does Pamuk (or anyone, anyone else) know what did Dostoyevsky have in mind when writing his novels?  It's not as if he could ask him...  Once a book is written in a language that I can understand, I don't need anyone to translate it for me further.

There, I'm done with complaining.  Don't let my fussing spoil the pleasure of reading the book for you - overall it is highly recommendable.
Posted by Bookworm at 21:20