Nadine Gordimer, Living in Hope and History: Notes from Our Century 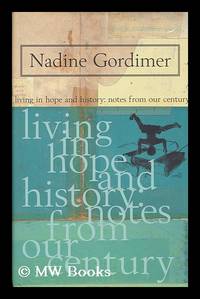 Literary Nobel Prize tends to be a good book recommendation...  but wait, didn't I say just that in my last post?  I did, but Nadine Gordimer gives me a good reason to repeat it.  Living in Hope and History is my second encounter with this delicious writer and I'm looking forward to reading more.

If you've read any more of this blog, you also already know that I love essays - another reason to savour Living in Hope and History.  Essays collected in this book can be roughly divided into two main groups:  those on writers and those on evils of apartheid (sometimes combined in the same piece).  There's more than that - as it should be in works written over a few decades - but sooner or later one of the two subjects surfaces.  I'm damn glad it does.

While I'm not too hot on the apartheid bit (simply because of not being very familiar with it), I fell in love with Gordimer's deliberations on writing and a writer's position in today's society.  She makes the profession sound noble, more than that, she inspires writers, potential or otherwise, to strive for nobility.

'Nobility' can mean something different to each individual, but for me it has much to do with the truth, with speaking of the truth loudly and clearly, unafraid of its inconvenience or unprofitability.  I spend a lot of time in virtual company of affiliate marketers presenting themselves as 'writers' and often end up bitter and disappointed under heavy showers of self-explanations these people create in defence of their profession.  Then along comes Gordimer, with her powerful words on writers as speakers of the truth (whatever this truth may happen to be) even in the face of adversity and I feel like I've just been given a breath of the fresh air.  There are people in the world who speak the truth even if their books are banned or burned, even if they themselves are being imprisoned, exiled, persecuted.  They don't give up.  They keep on repeating the politically incorrect truths because ultimately - the truth is more important, more powerful than politics.  Compared to that, all marketers of the world can go hang, they are not worth anyone's time and definitely not worth my upset.

If, by any chance, you happen to be a writer struggling to oppose ever-present selling out or simply in need of inspiration, then Living in Hope and History is a must for you.

If you are anyone else, it will simply be a highly enjoyable, well-written book.

Oh, if you are a 'writer' who employs his skill in affiliate marketing, do not read it.  It will only make you sad.
Posted by Bookworm at 02:34