Niall Ferguson, Civilization - The West and the Rest 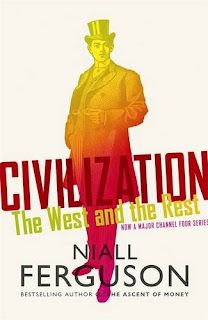 I have to admit, I approached this book with extreme caution.  Too many of contemporary works on 'civilization' prove to be a mixture of rhetoric and preaching, none of which I like.  Yet I do like to embark on verbal campaigns against consumerism and shallowness of the pop culture from time to time, so I thought it a good idea to learn some more on the subject.  The book was mine (for a time, that is - did I ever mention what a great fan of libraries I am?).

I have to admit (again!) I was pleasantly surprised.  Of course Ferguson does suggest his own explanation for why our civilization looks like it does.  I don't necessarily agree with him, but then again - it is not such a balderdash as I expected.  For details read the book yourself, I can only promise you that it's worth it.

If The West and the Rest was called A Doctrinal and Economical History of the World the title wouldn't be too far off mark.  Ferguson gives us skeletal histories of most (all?) of contemporary empires, presented in pleasant and quite believable way.  He also remains impressively impartial throughout the narrative (in the circumstances, he can be forgiven for claiming that British imperialism was ok because it brought to conquered lands as many benefits as disasters).  Sometimes it is actually difficult to guess what are the author's personal beliefs and I have to admit this is something I admire in a historian, especially when he talks about religion (which Ferguson does, among other subjects).  One exception - he surely hates communism - it's the only instance I detected where his language turned rhetorical and preachy - but it doesn't take much from the book's quality.

I'm not quite sure if I agree with the author's explanation for the 'greatness' of the Western civilization or, to be precise, I'm not convinced if 'greatness' is the right word to be used here.  'Powerful', yes, 'influential' - of course.  I would probably add 'predatorial' and 'ruthless' to this list and, funny thing, Ferguson's book convinced me even more that I would be right in this judgement.  Regardless of whether you think that Western civilization is a blessing or a bane, The West and the Rest does a good job explaining what are the sources of its success.

Even if you don't wish to join the debate, you can read the book for the sake of interesting, little known facts with which the narrative is generously peppered.  For example - did you know that most of Nazi uniforms were supplied by Hugo Boss?  I didn't.  That's why I'm glad I've read this book.
Posted by Bookworm at 22:30