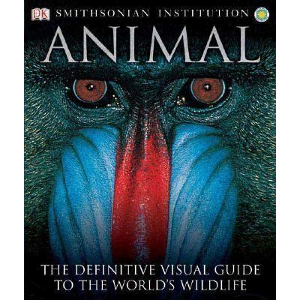 Here's the proof that solid knowledge possesses some weight - Animal: The Definitive Visual Guide to the World's Wildlife weights more than three kilogrammes.  Imagine that!

Visually, it is indeed a magnificent album.  I'm not sure if it's definitive, but it's definitely beautiful.  Pictures are amazing, and even if it contained not a single word, it would still be worth leafing through and admiring.  It does contain words though, plenty of them.  Over 2000 species are described, ranging from large carnivores through birds, frogs, corals to tiniest mites.  All good, but...

Let's just say that if you don't have serious interest in biology, Animal is not a volume I would recommend you to read.  It is full of information and interesting trivia, but overall it reads like a biology textbook, high school level.  A fantastic idea for a student, but not something most people would choose to devour in their free time.  Animal descriptions, in particular, are repetitive and full of dry data (length, weight, habitat etc.), so the risk of getting sleepy after a few pages is quite serious.  What irked me most were the descriptions of an animal's look - right next to its picture.  What's the point???

I might sound critical, but truth to be told, I believe this is a bit of a self-inflicted injury.  I think Animal: The Definitive Visual Guide to the World's Wildlife was never meant to be read for leisure.  It is just what it promises to be - a guide, a resource, to be consulted when you're searching for specific information.  In this context, it totally delivers and I have to say that if I had been learning my high school biology from this album instead of a rather drab, monochrome textbook I would have probably liked it much more.