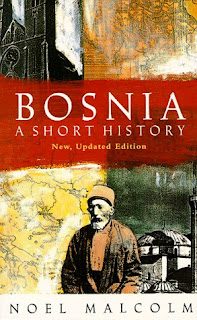 If Dervla Murphy (see my previous post) was to ever meet up with Noel Malcolm for the purpose of exchanging views on possible solutions to the Balkan conflicts of the '90, I would very much love to witness this discussion.  There's nothing like a good row!

Bosnia - A Short History is precisely what, through the title, it promises to be.  A 271-page (in my edition) narrative of the history of the Bosnian land, with another hundred or so pages of notes and bibliography thrown in for respectability.

While Balkan history itself is extremely confusing (a small piece of land with multiple policies and numerous power-hungry lords guarantees frequent changes of government), Malcolm does his best to explain it as clearly as possible.  A reader without serious interest in this particular area is likely to quickly lose track of names and events, but I blame it on the specifics of the region, not the abilities of the writer.  Even for a casual reader the book is rather pleasant to read - not exactly gripping, but fairly decent.

I am not able to judge historical accuracy of Bosnia - A Short History, but it feels impartial enough to be true (ish) - up until the nineties, that is.  The 1991-1995 war is heavily spiced with 'what should have been done-s' and other pieces of the author's personal judgement.  While I totally don't mind a historian being opinionated (I consider the ability to hold and defend an opinion to be a proof of intelligence), I refuse to accept it as 'history'.

I didn't particularly like Malcolm's interpretation of events either.  Unlike him, I don't believe that wars are ended by giving more guns to everyone.  I also prefer to view a war through personal stories of those involved, not through statistics.

It is funny how a set of events can change depending on who tells the story.  The war according to Dervla Murphy is completely different than the war according to Noel Malcolm (or, I presume, anyone else).  It appears that when it comes to complex events, there is no such a thing as 'the truth', there are just different - sometimes wildly different - versions of the same tale.

Reading two extremely different variants one after the other was a fascinating experience.
Posted by Bookworm at 00:10