A.L. Rowse, The Elizabethan Renaissance: The Life of The Society 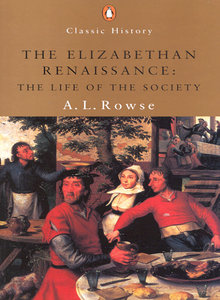 Once upon a time, I planned to write an article about Elizabeth I.  You can go about a plan like this in two ways - either you can read the appropriate page on Wikipedia, change the wording and thus become a totally legal copycat, or you can do it the hard way - get as many books on the subject as you can and put them to proper use.  Needless to say, I chose the second option, as you can see here and here and here.  Oh, and in today's post, too.

As far as I know, A.L. Rowse was a pretty famous historian.  This is the first book by his pen that I've ever read, but I'm familiar with the name, even though I can't exactly pinpoint how and why.

The book itself is not exactly about Elizabeth I, although the famous queen pops up on its pages often enough.  As the title suggests and the subtitle confirms (The Elizabethan Renaissance: The Life of The Society), it's about the times of Elizabeth, about life and social stuff and general reality during her reign.

As promised, so delivered.  There are chapters on food and drink, on customs, beliefs, social divisions, even on sex and witchcraft.  They all seem to be well-researched, too, with proper sources quoted (often in the text itself) and lengthy bibliography attached.  All good, but...

I found the book tedious.  It's full of names, both geographical and personal, which mean nothing to someone not in love with British topography or peerage - and when I say full, I mean it.  I'm sure there are people who would consider this a tremendous advantage, and confirmation of the book's scholarly merits but, how should I put it...  It's not exactly a page turner.  It has its moments, but overall - blah.

One exception:  The Elizabethan Renaissance is generously spiked with Rowse's personal remarks and these are absolutely precious.  Not that I agree with his views - he appears to have been an arrogant, snobbish bastard - but I'm charmed by his delivery.  SO politically incorrect.  SO sermon-like.  SO funny.

Oh, my intended article about Elizabeth never materialised, nor is it ever likely to.  I wrote a Squidoo page instead, collecting the reviews of all the Elizabeth-centred books I have got hold of so far.  You can view it here and if it catches your interest, check back now and again - I'll be adding to it slowly but surely.