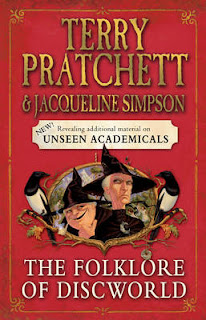 If there was such a thing as Pratchettology, I would've surely earned a Ph.D. by now.  I pretty much worship the guy.  I fall asleep to the sound of Discworld audiobooks almost every night.  I can quote whole passages from memory and I still laugh at the jokes, even if I've heard them a hundred times.

It's no surprise then that The Folklore of Discworld is not a novelty to me.  I read it for the first time some three years ago, when it was still brand new (well, new-ish.  Libraries do take their time when it comes to buying fresh releases), and, no need to add, the book seduced me instantly.  Folklore is another one of my tiny obsessions, so getting the two together was like Christmas coming early.

When I re-read The Folklore of Discworld recently, I was just as enchanted.

The book was not written by Pratchett alone.  Jacqueline Simpson, an acclaimed British folklorist is listed as a co-author.  In effect, the book is not exactly a classic Discworld novel.  More, it should probably be classified as non-fiction.  The basic idea is simple enough.  Discworld is full of magical creatures and customs that inevitably have their equivalent on our Earth.  The book explores those connections.

Ultimately, it is a fun way to learn more about our own folklore.  Discworld elements, although sparkling with pure Pratchettesque wit and sense of humour, are generally variations on material already covered in the novels.  Even so, The Folklore of Discworld is extremely readable and can be considered a treat even for (or especially for) die-hard Pratchett fans.