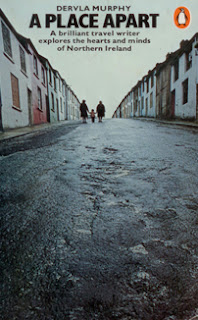 I guess it is time to officially announce Dervla Murphy month on Bookworm's Cave.  My recent library hunt has yielded five (5!!  Yessss!) of her books and due to sheer brilliance of her writing I am unlikely to reach for anything else until I'm done with those.

The series starts with A Place Apart, a book that is somewhat different from the usual Murphy fare.  For one, she doesn't travel far to reach her destination.  No long distance flights, no gruelling train journeys, just a quick hop across the border.  Yep, A Place Apart is Northern Ireland.

Today Northern Ireland conjures up few dramatic images but back in the 1978, when A Place Apart was first published, the situation was quite different.  The Troubles are usually described as a conflict between Ulster Catholics and Protestants, but it was much more complicated than that.  Despite her self-professed dislike of politics, Dervla Murphy does a lot to explain all the facets and factions involved.  Still, she does it in her own way, focusing on humans rather than organisations and institutions.

Murphy's compassion and humanitarianism are, as usually, awe-inspiring.  Despite the violence and fear, she reaches past the scary facades and treats all her interlocutors like human beings.  She took care to meet up with people from all sides of the barrier (and you might be surprised to find out that there were more than two) and to listen to their stories, whatever her personal feelings on the subject.  She does not hide her own opinions, but expresses them in contrast (not 'instead of') the ones she's not agreeing with.

A Place Apart is a courageous book.  It took courage to cycle around the troubled country, to seek out people of all faiths and political alignments and to relate their stories.  It took integrity to express her own, often critical, opinions without condemning others.

Once again, hats off for Dervla Murphy.
Posted by Bookworm at 16:03