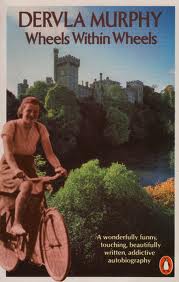 I'd been trying to track down Dervla Murphy's autobiography for quite a while before I finally spotted it in a not-so-local library a few weeks ago.  It spent some time waiting on my shelf (reading books EXACTLY in the order that they were acquired is one of my quirks, possibly the only situation ever when I'm actually being pedantic), but when its turn finally came, I devoured Wheels Within Wheels in one evening.

It is possible that my copy was incomplete - it ended abruptly at page 236, followed only by the evidence of torn pages and back cover - but if I missed anything, I'm sure it wasn't much.  The book was designed to record Dervla's life before she became a travel writer and the story took me to the moment when Full Tilt was published.

I had my doubts about an autobiography that ends when the subject's life becomes (from my perspective) really interesting.  I still would very much like to one day read volume two, but I concede that Wheels Within Wheels is a pleasant book.  Somewhere online (I can't recall exactly where), I stumbled across an interview with Dervla where she admitted that she never planned to publish it - the story was conceived as a gift for her daughter.  I find it easy to believe.  The memoir is very, very personal, full of insights into Murphy family life (and when I say 'family', I mean it:  the book is not only about Dervla, but about the whole clan).

If you ever wondered what sort of upbringing produces travel writers, the book is your answer.  Of course, I'm saying this with a huge wink:  you can't make a human being according to a standard recipe.  But Wheels Within Wheels explains a lot about Dervla and the person she's become.  We are all, to a degree, shaped by out early years and Murphy is no exception.

The cover of my edition recommended the book as, among other qualities, funny.  That just seals my general (low) opinion about blurb writers.  Wheels Within Wheels is honest, unconventional, down-to-earth, beautifully written, but NOT funny.  The story of Dervla Murphy's early years is anything but funny.  Sure, she tells it in a detached, light-hearted way but even so it is obvious that she was no stranger to suffering, nor was her family.

In a way, the book is also a historical source.  Between the lines it tells a lot about Ireland in the early twentieth century.  I found the picture fascinating, possibly because I live in the country today, but I dare say it will be of some interest to anyone interested in the green island's past.

I still hope that one day I'll be able to read part two of this extraordinary biopic.
Posted by Bookworm at 19:17