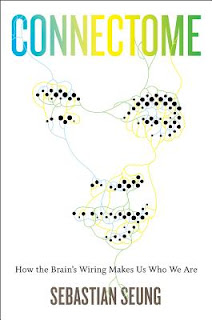 If you happen to be interested in brain science then Sebastian Seung's Connectome is a book for you.

While the title might sound a bit mystifying (but don't worry, you will know what a connectome is by the time you finish reading this review), the subtitle says it all:  How The Brain's Wiring Makes Us Who We Are.

By now pretty much everyone has at least basic knowledge of what the genome is and scientists have mostly cracked the code.  Connectome is similar, but instead of mapping our DNA, it represents the total of our brain's wiring.  Bad news:  we are at the very early stage of discovering its secrets.  Every single brain is built of billions of neurons, each neuron connects to many other cells and recording the whole network is far beyond our computing power at present.  Good news:  we'll probably get there eventually and once we do, amazing things will become possible.

Curing diseases like Alzheimer's or schizophrenia would be only the first step in harnessing the connectome's potential.  Scientists suspect that once we crack the code we'll be able to read and record people's memories, or even - in a sci-fi like scenario - to upload our selves into a network beyond the constraints of a body.

Yes, a lot of Connectome's contents sound like science fiction but let's not forget that today's reality is yesterday's fantasy.  Seung goes quite far into the future.  He realistically predicts that even small advances in connectomics will take decades.  We don't have the technology to see the connectome yet, much less to understand it.  But in a hundred years from now...

If it all sounds like rocket science, don't worry.  Connectome is written for absolute amateurs, with even basic ideas explained from scratch.  Things do get a little complicated eventually, but they never reach levels of complexity that a bright teenager wouldn't manage.  Fancy theories are translated into everyday language and clarified by pictures.  In addition, Seung makes all that science sound like fun.  I almost regretted that I didn't choose neurology for my career...

Reading Connectome may not be enough to turn one into a neurosurgeon, but it will certainly help readers to pick up some basic knowledge of how the brain works.  The book is light enough to be labelled as 'entertainment' and if you can still learn a thing or two in the process, I call it a very good deal.