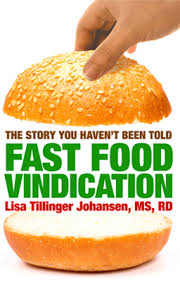 I've been interested in nutrition-related issues for quite a while now (as you can see here and here and here).  Usually I go for critiques.  I don't like fast food - or any processed food.  I think the stuff is harmful, positively dangerous, and that corporations behind food production should be locked up wholesale.  Still, I try to be a fair-minded creature and when I spotted Fast Food Vindication by Lisa Tillinger Johansen, I decided to give it a try.  Let's hear the other side of the argument.  Let's listen to the devil's advocate.

The book contains a few sensible notions.  Yes, nobody force-feeds customers of fast food chains (although manipulative advertising COULD be counted as a factor...).  True, healthy lifestyle includes physical activity and junk food vendors are not responsible for our lack of exercise.  Sure, in the end we decide what and where to eat and if we don't like what's being served, we can simply avoid the offending establishments.  Agreed.

Too much of Fast Food Vindication sounds like a propaganda brochure.  American dream, humble-beginnings-to-success, quality, inspiring stories, charitable works, blah blah blah.  I'm not buying it.  In fact, certain paragraphs in the book made me positively froth with rage, especially bits about employment practices and social responsibility.   Whatever can be said to defend McJobs, I worked at one once upon a time and NOTHING can vindicate the blasted soul-killers in my eye.  Nothing.

The author argues her case using arguments that sometimes verge on ridiculous.  You could, she says, go to a McDonald's and choose a healthier dessert, such as apple slices, which clock only 15 calories.  Apple slices!  Apple slices!  Who on Earth goes to a restaurant, ANY restaurant, to have an apple???  Congratulations, Mrs Tillinger Johansen, that's realistic indeed.

As a 'healthy drink option', she suggests sweetener-laced teas and coffees or diet coke.  Now, if you're curious as to what aspartame can do for you, I can only refer you to this article, or any of countless others available online.  Let me put it like this:  if my nutritionist suggested substituting sugar with sweetener (other than stevia, which seems to be ok but alas!  not available in fast food land as far as I'm aware), I would terminate our relationship instantly.

Fast Food Vindication contains lots of tables with calorie values comparing fast food fare and sit-down restaurants menus, stressing the fact that the latter can be far more fattening than the former.  Sure, home cooking can be calorie-laden, too.  Junk food is not good for you, no matter where you eat it.  Still, that doesn't mean that fast food joints are ok.  Even if they happen to sell apples alongside other stuff.

While a lot was said about personal responsibility (something I wholeheartedly agree with), I found no mention of fast food's influence on our eating habits or of negative effects of processed foods.  A serious omission, I believe, but it would make the case so much harder to defend...

I much prefer Michael Pollan's attitude to nutrition ('Eat food.  Mostly plants.  Not too much of it') rather than Tillinger Johansen's scrupulous calorie counting.  I don't see obsessing about serving sizes (which are, frankly, ridiculous) as healthy.  I don't call requests for labelling every scrap of food realistic.

Verdict:  vindication not successful.
Posted by Bookworm at 17:51