Bruce Jay Friedman, Even The Rhinos Were Nymphos 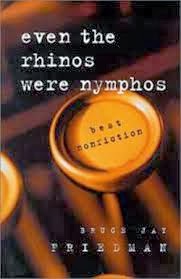 Even The Rhinos Were Nymphos - ain't that a magnificent title?

As it often happens with me, I picked the book for the title alone.  I may not be that interested in sexual habits of megafauna, but I suspected that the publication is not about zoology at all.  Rightly so.

Basically, the book is a collection of Bruce Jay Friedman's articles published previously in all sorts of Magazines for Boys.  You know the type, Playboy, Esquire and a range of less prominent titles.  Nah, you don't need to run yet - naked ladies (or nympho rhinos, for that matter) feature only occasionally, hardly at all, really.  True, these are distinctly testosterone packed pieces.  Just look at the subject matter:  detectives, drug dealers, pathologists(!), celebrities, supermodels, boxers...  But unless you are a certain very specific type of a girl, the faint-at-the-sight-of-a-mouse-oh-sugar kind, you're likely to enjoy them, whatever your gender.  I did, anyway, and I am most certainly NOT a testosterone packed male.

Style-wise, the book made me think of Hunter S. Thompson, without drugs and booze (some of you might say that Thompson's writing is ALL about drugs and booze and you might even be right, but...).  Friedman makes use of the same rambling, surrealistic, informal type of storytelling, although I suspect that despite appearance it takes a lot of work to make such a tale tick.  And his do tick, no two ways about it.  They are fun, they are entertaining, they are very readable.  Maybe not exactly High Literature - but I doubt the author ever aimed this way.

Great toilet read, really.  Which, I hasten to add, is a compliment.

One tiny thing, the articles in Even The Rhinos Were Nymphos are slightly dated.  They span years between 1968 and 1994, so it's been a while since they were hot news, or even particularly relevant.  Still, they were fun to read in 2013 and well, there's the historical value to think of...
Posted by Bookworm at 12:24