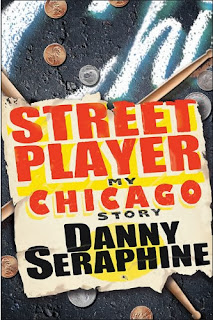 Despite my recent promises of improvement, Bookworm's Cave is still terribly quiet these days.  There are many causes, some of which are happy and will be revealed soon.  Other reasons for silence are not so great, but today I'm going to get at least one of them behind me, so that it can never haunt me again.  You see, I've been dreading writing this post, for weeks.

I was approached with a request to review Street Player back in...  July.  There, I've said it, the skeleton is out of the closet.  Despite the fact that I'm not getting paid for this and the only thing I receive in exchange is a free pdf of a book that I would never choose otherwise, I still feel terribly embarrassed.  How unprofessional of me!

At first sight, the book did not seem tempting at all.  For many years, Danny Seraphine was a drummer in a world famous band, Chicago, and Street Player is his autobiography.  I'm not particularly keen on musicians' memoirs.  Once you've read one, you've read them all.  From humble beginnings to fame, blah blah blah, sex, drugs and rock'n'roll, rehabs in between and a handful of celebrity names to glamour it all up.  Hardly worthwhile, once you've left the high school.

Despite the initial lack of interest, one evening I sat down with my laptop and opened the Street Player file, just to see what I'm supposed to drudge through.  I started reading and...  after only a couple of pages, I was totally hooked.  It turned out to be a very long evening :)

OK, let's be frank - Street Player does not differ very much from the abovementioned recipe for a musician's autobiography.  Still, it reads like a dream.  It's dynamic, not too pretentious, well-written and engaging.  I suspect this might be attributed to the non-famous co-writer, Adam Mitchell.  I can't be sure, but it smells very much like the kind of team where one side supplies the story plus trademarks and the other writing skills.  Well, if I'm right then Mr. Mitchell is a very decent writer indeed.  One just feels like turning (or, in my case, scrolling down) page after page, just to find out what happens next.

As to the story...  There are all the usual stages of musical career, but also Chicago mafia (and here I mean the town, not the band), glimpses of Seraphine's personal life, big dramas when band members leave or *gasp* die, even bigger dramas when the author gets kicked out of the group, multi-digit figures, groupies, flying wigs, behind-the-scenes yarns and yes, the appropriate share of celebrities.  Not necessarily in this particular order.

You may have guessed that the popular music scene is not exactly my pair of shoes.  Never before have I heard of the band Chicago either (although, as it turned out, I AM familiar with some of their tunes).  To tell you the truth, I'm not star-struck.  I don't think I'd like Danny Seraphine much, if we ever met.  Then again, I don't think I quite match Street Player's target market.  If you're a Chicago fan, or young and dreaming of rock'n'roll career, you'll probably love the book.

Uff, I'm done.  I hope this monster of a review will be at least some compensation for my monster of a delay :)
Posted by Bookworm at 16:27