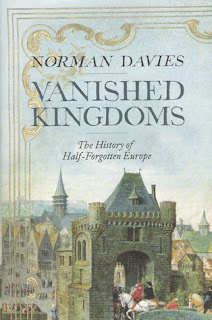 Vanished Kingdoms sounds more like a title of a fairy tale than a history book.  And yet, this is how Norman Davies decided to call his recent (2011) study of European past.

States rise and fall, such is their nature.  Some hang around for centuries, others expire after weeks or even days, but inevitably - what comes up must come down.  Davies gathered 15 examples to prove this theory.  To his credit, he didn't go for the most obvious ones.  It is more than likely that most people have no idea that some of his 'vanished kingdoms' even existed.

Each state is described in such a broad context that all the chapters taken together give the reader quite a comprehensive view of general European history, from the fall of Roman Empire almost to the end of the twentieth century.  Geographically, focus shifts from the British Isles, through Mediterranean, to Central and Eastern Europe.  The last area is Davies's particular speciality (he's published a few interesting books on history of Poland), so you can expect quite a balanced approach to the continent's history.  It's a treat, really, because few Western historians bother to go East in their studies.

When it comes to pure readability, Norman Davies as usually scores high.  While not exactly frivolous, his style of writing is light and engaging.  He has an amazing ability to un-twist and clarify even quite complex historical issues, so readers have a chance to ingest amazing amount of information without wreaking their brains.

Despite its size (740 pages of text proper), Vanished Kingdoms doesn't really tell you everything there is to tell about the subject.  Too many states, too many centuries.  For those craving further information, there are over fifty pages of notes on sources and relevant publications.

In short, if you're looking for scientifically sound European history from original perspective, this is it.