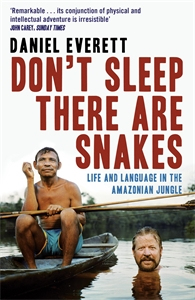 Don't Sleep There Are Snakes - it's been a while since I saw a title as vibrant as this.  Does the book  match the title's greatness?  Not really.

The publication is a curious mixture of ethnography and linguistics, with a modest amount of travel memoir thrown in for good measure.  Everett has spent most of his professional life in Amazonian jungle, learning about culture and language of a tiny Indian tribe, the Pirahas.  Initially, he was there as a missionary, trying to convert his hosts.  Curiously enough, he ended up losing faith, when confronted with Piraha's unshakable lack of belief in things that cannot be seen or heard.

Don't Sleep There Are Snakes is divided into two parts.  The first describes Everett's life among the Pirahas, the other consists of hard core linguistics, meaning little or nothing to ordinary mortals.  Life in the Amazonian jungle is fascinating by definition.  Stories about anacondas, tarantulas and the like grab the reader's attention and hold it fast, Pirahas sound like a colourful bunch.  Unfortunately, if the first half of the book reads like a dream, the rest is an exhausting trek through a swamp.

It's not that I doubt Everett's academic credentials.  He probably knows what he's talking about, but I can't imagine how his linguistic theories could be of any interest to the general public.  Perhaps the book is meant for linguistics graduates?  I have a feeling that the author tried to please both target audiences, the professionals and the rest, and the effect is somewhat messy.

Still, Don't Sleep There Are Snakes is worth reading, if only for the first part.  If you happen to be big on linguistics, you might even enjoy it all.