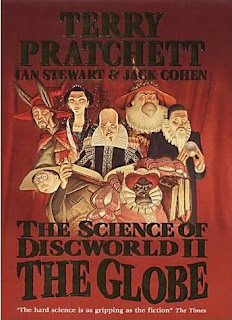 Take a Discworld novella and mix it with some quantum physics.  Add a dash of anthropology, a pinch of religion, some history, a few grains of astrophysics and lots and lots of light-hearted, humorous commentary.  Oh, and don't forget to season everything with Shakespeare.  Hey presto, you've just created The Science of Discworld II - The Globe.

If the above recipe looks like too much hassle (or if you're blown away by the sheer difficulty of the task), don't worry.  Terry Pratchett, Ian Stewart  and Jack Cohen have already cooked up the dish for you.  Take it home and enjoy.

If you have a look around this blog, you will know that I am an unconditional Pratchett fan.  I know almost every word of all Discworld novels so getting my hands on one of the spin-offs is a particular joy for me (as in Pratchett + something I haven't read yet = pure delight).  Especially if he teams up with guys like Stewart and Cohen.  It appears that the three gentlemen look at the world in a very similar way.  Result:  The Science of Discworld is very Pratchettesque, although I would hazard a guess that the man himself has actually written only small portion of it.

I have to confess that my brain panted a little at times, especially when I was reading some of hard core physics chapters.  The Science of Discworld is somewhat heavier than the usual Pratchett fare - probably too difficult for children or young teenagers (unless, of course, he or she is a small genius).  On the other hand, if you're looking to be entertained AND taught a thing or two, I can't imagine a better choice.

I've just noticed how I'm focusing on the scientific part of the book, completely ignoring Discworld elements.  You deserve a hint or two.

Here be elves.  Time and transworld travel.   Spanish ladies (well, one Spanish lady).  Last but not least - a bunch of meddling wizards from Unseen University which, really, tells it all.