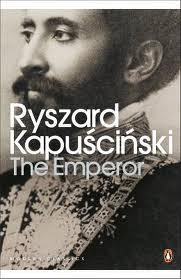 Ryszard Kapuscinski was one of the most talented Polish writers of the twentieth century.  A journalist by profession, he travelled around the world even back in the days when few Poles were allowed to leave the country.  He passed away in 2007 and left behind a long list of titles, many of which are available in English.

Until recently, if you asked me what kind of books Kapuscinski wrote, I would instantly answer:  travel writing.  Maybe, but only maybe, I would add - journalism.  I've read quite a few, in Polish, years ago, when I was probably too young to understand what they are about.  Now, just after finishing The Emperor, I know that Kapuscinski was much more than a travel writer.  My own explanation of his style would be long and rambling, let me borrow a term from the writer's Wikipedia page instead:  magic journalism.  A non-fiction equivalent of Gabriel Garcia Marquez.

The Emperor tells the story of final years and fall of Haile Selassie, the last autocratic ruler of Ethiopia.  After the revolution, Kapuscinski tracked down survivors from the imperial court and asked them to share their memories.  The book is constructed as a series of tales by those ex-officials, interrupted from time to time by author's own commentary, chronologically relating events in the changing country.  That's the theory, anyway.

In reality, it's all Kapuscinski only pretending to speak in many voices.  I don't accuse him of inventing the facts, he probably did interview his sources, but I can't possibly believe that he quoted them verbatim.  They all sound too much like one person.  Too much like Kapuscinski himself, in fact.  Usually I would froth at such a use of poetic license but in this case, the procedure actually enriched the book.  The Emperor is not simply a journalistic report, it is a philosophical study of corruption and dictatorship that probably would be just as true for any other autocratic establishment.  Machiavelli meets Swift.  Details may change, but the attitudes, the atmosphere, the smell of rot remain the same.

It is hard not to suspect Kapuscinski of alluding to communistic Poland, too.  A country where thinking is deemed dangerous?  Where informants are everywhere?  Where those in power constantly backstab each other only to remain at the trough?  The simile is too perfect to be a coincidence.  Polish writers of that era (The Emperor was published in 1978) were masters of double-meaning.  Censorship would not allow any direct criticism of the regime but hey, all that Kapuscinski wrote is history of Ethiopia, right?

All in all, The Emperor is surprisingly rich and polished book, full of hidden sarcasm and perceptive comments on human nature.  No wonder it can be found on the list of Penguin modern classics.