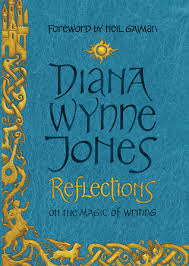 I'm not a great fan of children's literature and I positively hate teenage fiction*.  Why, then, would I choose to read Diana Wynne Jones's Reflections?

Because it's an essay collection, that's why.  Ok, maybe not exactly essays, it's a mishmash of various papers, commissioned articles, speeches and the likes, but it feels like an essay collection.  Oh, and it's subtitled On The Magic of Writing.  No aspiring writer could resist THAT, am I right?

Reflections are pleasant enough.  Wynne Jones was a graceful wordsmith, her stories are easy to read whatever the subject.  Pieces collected in this particular volume are most definitely not meant for children.  They are more serious than that, concerned mostly with theory of children literature and changes in publishing business throughout decades.  There's also a lot of musings on the process of writing itself, and a handful of tips for other writers, potential or not.  Serious matters are illustrated with delightfully quirky anecdotes, mostly from Diana's childhood (about, for example, tiny Diana's inability to distinguish between Germans and germs...  Set in wartime England, the cameo is hilarious).

Wynne Jones surely wielded some kind of magic:  for a good while after reading Reflections, I actually felt like tracking down some of her books and immersing myself in kid's lit.  Me!  The urge quickly passed - I've limited myself to watching Japanese cartoon adaptation of Howl's Moving Castle - but I still might end up with Diana's book sometime in the future.

One (unfortunately massive) flaw of Reflections is the book's repetitiveness.  You start delighted, but when anecdotes are repeated again and again, the enchantment breaks.  Some later chapters are simple re-writes of the previous ones and while Wynne Jones usually talked sense, I wouldn't sign up for hearing it once (twice, thrice...) more.  Obviously some issues (such as writer's freedom) bothered her more than others.  I suspect the publisher is to blame, pressing for a book when there's no sufficient material to fill it.  See, the pieces are perfectly fine if you keep in mind they were to be delivered singly, one paper per one audience.  Collected, well...

Cut the volume to half the size, please.  It might work then.


*I suspect that deteriorating quality of YA lit has something to do with general dumbing down of society - it's just that I'm not sure which is the cause and which is the effect...
Posted by Bookworm at 17:53

Email ThisBlogThis!Share to TwitterShare to FacebookShare to Pinterest
Labels: children literature, essay collection, essay on writing, how to be a writer, writing