Richard Dawkins, The Magic of Reality 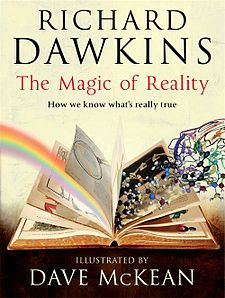 Some books don't appear too gripping at first sight.  Usually the first impression holds;  the book may be tossed aside after a few pages if it proves completely unreadable, or it may be dutifully struggled through with more discipline than enjoyment.  Sometimes, though, an exception happens.  A book, seemingly unremarkable, turns out to be amazing.

To tell you the truth, when I first saw Richard Dawkins's The Magic of Reality, I was not impressed.  Stuff for kiddies, I thought.  Possibly gibberish.  Possibly boring or outright silly.

I was wrong, on all counts.  Well, ok, it is suitable for bright kids, but that doesn't mean that adults won't enjoy it.

The Magic of Reality is a beautifully illustrated primer in sciences.  It explains the very basics:  how evolution works, why seasons change, what are things built of, how rainbows form and many, many other phenomena.  Nothing too advanced - a smart ten year old shouldn't have any problems in comprehending the book.  A reasonably educated adult is not likely to find much new knowledge here, but you never know.  I, for example, have finally learned how astrophysicists find out what distant stars are made of.  I had always thought that scientists' claims are somewhat dubious;  after all, we can barely see faraway galaxies, so how can they be so sure about their composition?  I'm not dubious anymore, I've learned the trick, or at least the theory - as will you if you read the book.

Illustrations are another praiseworthy aspect of The Magic of Reality.  They are beautiful, unconventional, sometimes bizarre, very artsy.  Science turned into a fairy tale - brilliant!

I particularly loved Dawkins's treatment of Christianity and other leading religions.  He often tells mythological stories to show how people explained natural phenomena before the advent of science and he throws Christian myths into the same drawer as Indian or African tribal stories.  There's a strong message there, probably not much to the believers' liking:  it's all fiction.  Moreover, with clear and logical explanations, it's difficult not to see how RIDICULOUS it is to believe e.g. that someone could turn water into wine (without any yeast or fruit, that is.  And some time.  Everyone could manage THAT).  It's not that Dawkins is disrespectful, oh no.  It's just that he absolutely refuses to give religion the reverence that is so common in more politically correct (or sales oriented - there's no point in pissing off potential customers) publications.

In short, I expected nothing much and ended up with a delightful book.  Such surprises I could definitely use more of!
Posted by Bookworm at 10:36