Robert Calderisi, The Trouble With Africa 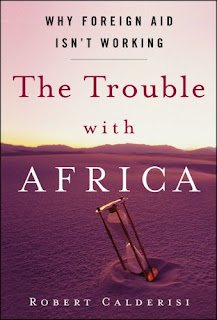 As promised, today we'll take a look at another book trying to answer the question:  what's wrong with Africa?

Robert Calderisi has enjoyed a long career in senior positions in the World Bank.  His explanation of Africa's predicament couldn't possibly be further from Giles Bolton's (see yesterday's post).  In fact, the two gentlemen agree only on one thing:  foreign aid does not work.

So, according to Calderisi, who's the culprit?  Simple answer:  Africa.  Corrupted leaders steal the money.  Tribal traditions foster corruption and inefficiency.  People on the continent look for foreign scapegoats to blame for all the ills instead of getting to work and fixing their own problems.

The West, if you happen to wonder, has been only a beneficial influence in African history.  I can't resist quoting a few snippets here...  [Slavery's] impact on Africa's general population is also difficult to establish.  But not everyone agrees that the damage was profound or permanent.  How smooth!  It's not that Calderisi himself would ever be so cold-hearted, but some people...  Anyway, it's important to remember that (and here I'm quoting again) most of the slaves descendants in the Western hemisphere lead better lives than their distant cousins on the other side of the Atlantic.  It almost makes you want to volunteer for shackles, doesn't it?  When it comes to colonialism, well...  One does not need to defend colonialism to recognise that some criticisms of it are grossly exaggerated.  Tell that to the half of Congolese population exterminated by the adventures of the Belgian king Leopold.  Holy shit, even Hitler managed to kill off only one fifth of Poland's people!  Or am I, perhaps, exaggerating?

(I am.  But I simply can't resist hyperbole)

Forgive the venom, but such statements truly boil my blood.  Yeah, sure, Africa is corrupted, but the West is definitely not such a fairy godmother that Mr. Calderisi claims it to be.

What's the author's recipe for dealing with the African pickle?  Simple.  Cut the aid.  Don't pour money into hopeless ventures.  Give to those who obediently follow World Bank's orders and to make sure nobody steps out of the line, send in an army of 'international observers' (because more Westerners would be interested in  'consulting' in the tropics funded by aid money, perhaps?).  If I believed that the World Bank is such a benevolent institution, I would probably agree it's a great idea.  Unfortunately, I don't.  I'll refrain from saying anything more.  Enough venom has been spilled.

When it comes to literary values, Calderisi holds his ground, more or less.  The narrative is smooth and it reads well.  Frequent 'odes to self' (oh, I worked so hard and the villagers loved me so!) jar, but with a bit of effort they can be seen as comic relief.  I guess fans of capitalism and global corporate takeover will enjoy The Trouble With Africa very much.  As to the rest of us...  Well, it's important to listen to the other side's arguments too.
Posted by Bookworm at 23:54