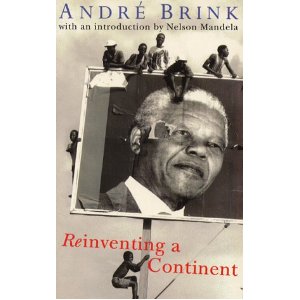 Up until now, South African literature equalled Nadine Gordimer to me (oh yes, Nobel Prize does give you this extra bit of publicity).  I'm smitten enough with her writings to search for more - hence Andre Brink.

Reinventing a Continent is a collection of essays (a bit of a tradition on this blog, ehem, ehem...) which, on the surface, are not much different from Gordimer's.  Inevitably, much is said about apartheid and associated nightmares, but since the book consists mainly of pieces written during the transformation years, there's some hope there, too.  Otherwise, Brink talks about literature and function of culture in oppressed societies, about censorship and general condition of mankind.

I'm not very fond of theory of literature (the best way to kill art is to write a thesis about it, or so I believe), so some of Brink's essays did not resonate with me.  This is as much criticism as I can spare, the rest is pure raving.  Elegant language, shrewd observations and great humanity are only some of the book's features.  Just like with Gordimer, 'no bullshit' attitude prevails (although I very much doubt if Brink has used exactly those words anywhere in his writing) and one is really forced to agree that tragic circumstances breed great writers.

My favourite essay in Reinventing a Continent  is colourfully titled The Hour of the Idiots and, perhaps surprisingly, is the best commentary on post-Nazi Germany that I've ever read.  Even if you do give the book a skip, be sure to seek it out - a masterpiece.

I think there will be more of Andre Brink on this blog some time in the future.