Sandra Mackey, The Saudis: Inside The Desert Kingdom 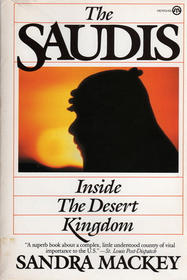 I've recently read (and reviewed, of course) a book by Thomas Friedman, a book which made me really angry and which, among other subjects, mentioned Saudi Arabia a lot.  When I saw Sandra Mackey's The Saudis on library shelf, I instantly grabbed it.  If I ever have a chance to get into a blazing row with Mr. Friedman, at least I'll know what I'm talking about.  Or, more likely, I'll be more confident when smirking in the silence of my own mind.

Until I've read The Saudis, all I knew about Saudi Arabia could be summed up in 'somewhere in the Middle East, plenty of sand and oil, you can get decapitated for funny things, not really a place where I want to spend my holiday'.  Nah, to be able to argue about geopolitics (even in imagination), you need to know more.

The Saudis was published in 1987, which makes the book nearly as old as I am.  Not the most up-to-date account, I admit.  A lot has happened since it was written, plenty of things must have changed in Saudi Arabia too.  Still, it's the clearest exposition on Middle Eastern politics and psychology that I've ever read.  The best explanation of the East/West clash we're experiencing today.  As I turned page after page, I kept saying to myself - shit, I wish she wrote a sequel.

Saudi Arabia as described in Mackey's book is admittedly scary, but there are some aspects of its culture that I actually admire.  I applaud their love of freedom and rebellion against being forcefully turned into faceless work force in the name of 'modernity'.  I congratulate them on their wisdom in putting family over career.  I still don't want to spend my holidays there (and they don't want me there either - how convenient!), but I've gained new insight into this proud desert culture and perhaps some understanding why they don't want to let go off it so easily.

As to geopolitics - I guess it will take many more books before I can make some sense of the bubbling, oil-fuelled cauldron of the Middle East, but I'm getting there.  Stay tuned.
Posted by Bookworm at 19:33