Janine di Giovanni, Madness Visible: A Memoir of a War 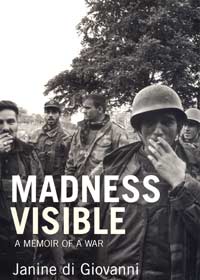 Madness Visible is a very apt title for a book about Balkan wars.  It is focused on 1999 conflict in Kosovo, but it visits all or most of the former Yugoslavia battlegrounds.

Let me put it straight:  it's a book that kicks you in the teeth, plain and simple.  Not for delicate constitutions, or pink-bubble minds.  The language is not particularly graphic, but facts described in plain words are enough to seriously shake the reader.  I was reading the book with a mixture of frustration born out of helplessness and fury.  I seriously had moments when I wanted to crash the book against the wall - nothing wrong with the book, it's just that the anger I felt needed some outlet.  If I felt that angry when reading about it, I can't even imagine feelings of people who actually lived through this nightmare.

Janine di Giovanni has a talent for asking difficult questions.  She moves outside the 'us - good, them - bad' perspective, but she doesn't achieve it through murky philosophy and avoiding slippery ground.  She never lets you forget she's talking about people, not ideas.  Madness Visible is full of people, individuals with names and terrible stories to tell.  It is a perfect antidote for official propaganda of war-waging states.  If you ever find yourself drowning in patriotic speeches and 'we vs the enemy' talk, run to the library or a bookshop and get this book.  'The enemy' is not some faceless entity composed of bloodthirsty ghouls.  People are people, anywhere you go.

To be quite frank, Madness Visible scared the shit out of me.  Things happened - hair-raisingly evil things.  Cruelty and stupidity can be let loose upon the world, even today.  There was no saviour to stop them from happening.  There was no higher power to forbid killers to kill, rapists to rape, arsonists to burn and torturers to maim.  It all happened, less than twenty years ago.  And what I perceived as probably the most terrible thing is this - there was no one to punish them either.  Most of the perpetrators are still walking free, managing businesses and generally not being put to any inconvenience.  I have a nasty feeling that the only message they got is 'I got away with this once, I can do it again'.

Oh yes, the only thing that Madness Visible lacks is a list of killers, organised by name or perhaps by length of the sentence received.  It is difficult to write about things non-existent, though.
Posted by Bookworm at 19:55