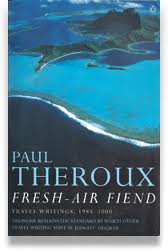 Is it just me, or does the title Fresh-Air Fiend suggest something from fantasy shelf?  It might be my vivid imagination, but in my mind the word 'fiend' is neatly filed away in a drawer marked 'Witches, Demons and other mystical stuff'.

Nah, I'm just pulling your leg.  Fresh-Air Fiend is about travel and staying outdoors, mostly.  It is an essay collection (yep, another one), mainly concerning travelling but also writing and well, general wondering about 'how does this world work'.  It is a curious mixture of exotic (Africa, China, Pacific Islands) and not-so-exotic locations, with a good deal of retrospection thrown in for good measure and a few literary reviews to finish it off.  Oh, and two short pieces of fiction which do not fit the rest in any way whatsoever.

I have mixed feelings towards Theroux's writing.  He's eloquent, yes.  His travelling experience is impressive.  He's opinionated, and while I usually adore this trait, in his instance it irks me - don't ask me why.  After reading Fresh-Air Fiend, I like him much more.  I can't help liking people who avoid human gatherings and camp on desolate islands instead.  Another, more important reason:  it appears that Theroux is not afraid of voicing unpopular truths, something I didn't notice when reading him previously.  Yet, someone who claims publicly that the Olympics are about business opportunities, not sport (to give you only one example) is definitely worth listening to - people who don't buy or promote bullshit are getting rare these days.

As long as the essays stay focused on travelling and places, the book is great.  In the last hundred pages or so, Theroux strayed towards literary criticism and cameo biographies and well - I would be happier if he didn't.  It's not that his reviews are bad as such, but they lack this certain sparkle, the flare, the liveliness that his travel pieces contain.  They just don't match the rest of the book, or such is my impression.

Still, Fresh-Air Fiend is a highly satisfying travel book.  You can always skip the last chapters.