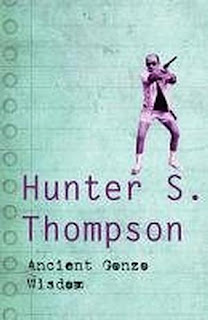 Hunter S. Thompson was the man behind Fear and Loathing in Las Vegas and The Rum Diary.  I've seen only the latter and have read neither, but the guy was enough of an icon to somehow create a shelf for himself in my crowded mind.  I chanced upon a book of interviews with him and thought - well, why not?

I still have some homework to do before I can pass the final judgement (please, see me wink.  I'm not THAT autocratic), but after over four hundred pages of Thompson interrogated, I'm pretty close to asking - what's all the fuss about?

Yes, he was courageous to present no-bullshit attitude as often as he did.  He was wonderfully politically incorrect, agreed.  He expressed some sentiments with which I wholeheartedly agree and which are terribly unpopular in our profit-obsessed reality.  It's great that he managed to squeeze fame and livelihood out of getting high and expressing honest opinions - this trick takes a lot of guts and gets increasingly rare.  But only a particular kind of person could call this 'wisdom'.  Not me, sorry.  Subtitling the book Ancient Gonzo Wisdom irks, even if taken with a pinch of salt.

Interviews with Hunter S. Thompson read rather well, despite being subjected to some awful editing.  Anita Thompson is surely supremely qualified to talk about Hunter, having married the man a few years before his death, but I doubt her editorial qualifications.  The collection is full of typos, irritating linguistic mishaps and the same questions (and answers!) repeated ad infinitum.  Such a nightmarish treatment didn't manage to kill the book, not entirely, but knowing that it could have been so, so much better hurts.

Lack of editing skills aside, I am not a fan of people who make brisk trade selling mementos of dead relatives.  How ghoulish can one get?  I can't help thinking of Amy Winehouse's father publishing her biography in less than a year since the girl died.  It's disgusting enough when done by paparazzi, but family making money of a corpse?  Sick stuff.

Back to Interviews with Hunter S. Thompson.  If the book was shortened to about half the length, purged of spelling mistakes and repetitions and maybe glued up into some sort of a monster interview with Hunter, it would be superb.  As it is, it's digestible but only just.

If your admiration for Thompson is moderate or non-existent, approach with care.