Chuck Thompson, To Hellholes and Back: Bribes, Lies and the Art of Extreme Tourism 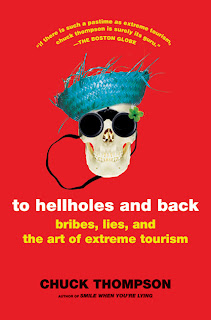 'If there is such a pastime as extreme tourism, Chuck Thompson is surely its guru'.  What a tempting line to put on a cover, especially if it's backed up by the (presumed) authority of The Boston Globe.  The book in question is called, just as catchily, To Hellholes and Back: Bribes, Lies and the Art of Extreme Tourism.  If I were to sum it up in one word, it would be this:

Don't run yet, the book is not really bad.  It's light and pleasant, quite funny in an undemanding way, readable in the low-gear concentration mode.  A perfect travel companion for a package holiday or a business trip:  conventional enough not to make you feel bad about yourself but slightly more exotic than your destination is likely to be.

Let's face it - To Hellholes and Back to extreme tourism is what I am to the Duchess of Cambridge.  Yes, I'm a dark-haired female of similar age, but I'm missing a few crucial details (like a score of titles, vast pocket money account and a prince for consort) and so does Thompson's book.  Congo (Democratic Republic of Congo, to be precise) surely is a dangerous place, but markedly less so when you're visiting it under a guidance of a $4,000 fixer.  India can be awe-inspiring, but not when you're jumping from one standard tourist attraction to the next in a chauffeured car and if going to Walt Disney World is extreme tourism, then extreme tourists are as common as dirt.  Forgive the venom, but when someone tries to sell me a golden egg and delivers a handful of gold-ish tinsel, I believe I'm entitled to a disappointed rant.

As long as you're not really expecting any hair-raising adventure or sophisticated intellectual pursuits (generous dose of poo jokes is only the most obvious example of Thompson's style), the book is quite digestible.  Mass market title, sure, and it teaches you more about the mind of an American tourist than any particular geographic location but still - edible and fairly entertaining.

Email ThisBlogThis!Share to TwitterShare to FacebookShare to Pinterest
Labels: america and americans, chuck thompson, dangerous destinations, to hellholes and back, travel writing