I Never Knew There Was A Word For It, Adam Jacot de Boinod 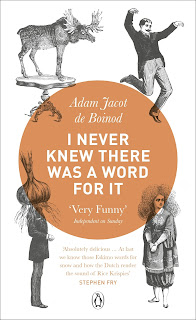 Word-lovers are my kind of people.  You know the type: people who are genuinely delighted by digging up a little-known, little-used or merely weird expressions.  Sir Terry Pratchett springs to mind (with his obvious joy in using words like 'sussuration' or 'figgin'), but the world is full of word-o-maniacs of a lesser standing, too.

I Never Knew There Was A Word For It is a book just for them.

Three books, to be precise.  The volume consists of three separate titles bound together:  The Meaning of Tingo, Toujours Tingo and The Wonder of Whiffling.  A bit of a bargain, really.

De Boinod's impressive collection is full of strange words and phrases with even stranger meanings, gathered from numerous languages from around the world (in case of the first two parts) and old/slang English (The Wonder of Whiffling).  Let me give you a few examples (and I'm quoting directly):

kakobijin (Japanese) - the sort of woman who talks incessantly about how she would have been thought of as a stunner if she had lived in a different era, when men's tastes in women were different

wosdohedan (Dakota, USA) - paths made by squirrels in the grass

As you can see, de Boinod's words are really strange sometimes.

Don't worry about the book's thickness (more than 700 pages) - it looks scary, but in reality it is full of drawings and averages about 15 lines of text per page. :)

I Never Knew There Was A Word For It is not really an exercise in foreign languages - you're unlikely to remember more than three expressions out of the whole brick-like book.  It's more of a statue to the human ingenuity when it comes to inventing words.  You can see how people's environment and lifestyle shapes their language, and also how intermingled languages really are.  A true feast for people of philological persuasion.