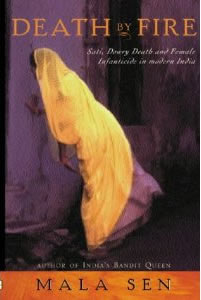 Death by fire is called sati in India (some prefer to spell the word suttee).  It is a very old custom, reaching back in time almost to the beginning of our era.  Illegal since 1829, it still makes headlines from time to time - or, as in this case, becomes a subject for a book.

I should probably clarify that not all cases of dying in flames qualify as sati.  Accidents don't count, neither do political protests.  Sati is deeply ritualistic and is committed by recent widows by jumping into the funereal pyre of their husbands.  In theory it is a completely voluntary act, arising out of deep religious feelings and devotion to the deceased.  In reality - well...

Mala Sen's Death by Fire paints a chilling picture.  Widows, sometimes as young as 18, are still being burned in India (most recent sati that the Wikipedia knows of was committed in 2008).  It is not altogether certain whether they consciously choose incineration or make the decision under social/economic pressure.  Death by Fire does not directly answer this question, but it strongly suggests the latter option.

Apparently, being a woman in India is not a happy experience in many cases.  The subtitle of Sen's book really says it all:  Sati, Dowry Death and Female Infanticide in modern India.  Girls are considered financial burden, to be avoided if necessary.  Obviously this doesn't hold true for all Indian families, but let's just say that the weight of tradition generally does not look favourably at girl power.  Things are changing, but, if Sen is to be believed, they aren't changing fast enough.

Truth to be told, Death by Fire does not impress with the amount of raw data.  It focuses on one case (sati of Roop Kanwar, 1987) with only a handful other examples thrown in here and there. I couldn't help observing rather sourly that with the way the book is composed, one learns more about technicalities (and difficulties!) of doing research in India than about female oppression.  We are told where the author went, what she ate and who she spoke with but reliable figures are harder to come by.

Well, the book might lack in scientific discipline but it is gripping nevertheless.  I approached it with some doubt, but sailed through the volume effortlessly.  I actually found it difficult to put down - a pleasant surprise.