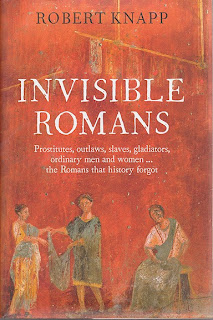 Did you know that the ancient Romans had superpowers?  What else would you call their ability to become invisible?

No, but seriously, Invisible Romans is not about X-men-like qualities that subjects of the Empire exhibited.  Some social groups are invisible indeed, but only to us and only because of the nature of sources available.

Our knowledge of the ancient world is based mainly upon surviving literature.  Today everyone can be a writer but two thousands years ago things were somewhat different.  Few people were literate.  Even fewer could afford to forgo work and compose verses (on second thought, maybe today is not so much different).  The outcome is easy to see - we have lots of sources on great personages of the age, commanders, politicians, aristocrats etc., but nothing or next to nothing on everyone else.

The idea for Knapp's book was to ignore the usual 'aristocratic' texts and to collect all the sources that give us a glimpse of lower social orders.  Thus, he describes lives of thieves and prostitutes, gladiators and soldiers, the poor, slaves and freedmen.  Anyone not fitting these categories is grouped in all-encompassing chapters on 'ordinary men' and 'ordinary women'.  Invisible become visible again.

Knapp's sources are quite fascinating.  Grave inscriptions.  Papyri fragments.  Dream interpretation textbook.  Astrological compendium.  A few 'classical' texts were used as well, but only if they showed any of the 'invisibles'.

One could argue that the list of sources used is rather short, but Knapp certainly squeezed them to the last drop.  Each statement is followed by detailed references, quotes from ancient authors are frequent and substantial.  For someone interested in further study, the road is clearly marked.

Truth to be told, Invisible Romans is not exactly a page-turner.  There's nothing wrong with the book, not as such, but it's too conservative to my tastes.  If I were to describe it in one word, it would be 'proper'.  Proper citations, proper attitudes, proper structure - all as it should be, but nothing to surprise or amaze or raise any sort of more vivid emotions.  Very fine scholarship, little flair.  Which is fair enough in a book from this genre.  Conventional but sensible research is always better than thrilling gibberish.