Bill Bryson, At Home - A Short History of Private Life 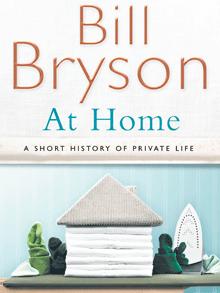 Today, let me introduce you to Bill Bryson, The Master of Anecdote.  You may have heard of him before - he's written more than twenty books of travel writing, history, language and other things, the most famous being in all likelihood A Short History of Nearly Everything.

At Home - A Short History of Private Life, published in 2010, reads very much like a sequel to the aforementioned title.  This time Bryson refrains from space exploration, focusing instead on domestic environment (and anything that can be even remotely associated with domesticity), but general tone of the book remains the same.  Light, amusing, full of anecdotes, even slightly tabloid-ish (the horrible, the scandalous, the eccentric, you know the drill...), At Home is extremely readable, to say the least.

Is it trustworthy as a historical source?  To tell you the truth, I'm not sure.  It's obvious that Bryson colours things up for effect, but that alone wouldn't necessary make his stories untrue.  A few spot checks I engaged in while reading At Home generally confirmed Bryson's narrative.  It appears that he sticks to facts, but boosts them up with literary special effects which, depending on your temperament, can be seen as a blessing or a curse.  Science may get stripped of some of her gravitas, but it becomes much more accessible in the process.  I call it a fair deal.

Bryson's particular forte is study of early inventors and Enlightenment-era scientists.  Even a book about home is spiked with stories of eccentric Victorian gentlemen creating new disciplines from scratch.  All sorts of histories - architectural, medical, industrial, culinary - are somehow squeezed between the cellar and the attic.  Chapters are called after various parts of a dwelling but in some cases the narrative gives only a symbolic nod to a particular room before going off to explore something entirely different.

Despite this gentle tendency to stray off the declared topic, At Home is an entertaining and engaging book.  Bryson proves that history can be fun and for that he can only be applauded.