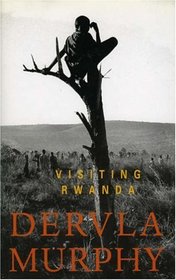 Visiting Rwanda is by far the grimmest of Dervla Murphy's books I have read so far.  No wonder, since it describes a journey to a sad country in sad times.

In 1994 almost a million Rwandans died in a blood bath later called 'the Rwandan genocide'.  The extreme cruelty of perpetrators shocked and outraged the whole world, but the 'international community' proved unable (or unwilling?) to stop the tragedy.  Despite millions of aid money flowing into the country, two years after the slaughter Rwanda was still a shattered place.

Even fearless Dervla Murphy had to make some concessions to the unstable situation in the war-ravaged land.  Forget the bike, on this journey she aimed at hiking, but because of the dangerous vibes in the air (and proximity of deadly incidents involving foreigners) even this had to be toned down to limited forays in NGO vehicles or other supposedly secure ventures.  Despite the precautions and her respectable age, Dervla had quite a few unpleasant adventures with desperate or simply vicious individuals.  Her kindness and empathy didn't help much - she was painfully aware that some people met along the way may have been war criminals.  Everyone's tolerance has limits.

I don't feel qualified to explain the twisted politics of Rwandan conflicts.  Even after reading Visiting Rwanda I'm not sure if I understand exactly what happened.  Murphy spares no hard words when it comes to condemning both the perpetrators of the genocide and the impotence of the 'international community'.  The UN is specifically singled out as the object of her criticism (you, dear reader, be the judge whether deservedly or not), and the 'aid-people' get their usual share of harsh comments.  Political deliberations are accompanied by general contemplating of human nature, perhaps inevitable in the circumstances.

Overall, you'll find very little of 'the cheerful Dervla' in Visiting Rwanda.  Considering the background of her journey, this is not in the least surprising.  The book itself is, of course, of the highest quality, but there is no denying its unsettling effect.

Homo sapiens is not as laudable a species as he believes himself to be.
Posted by Bookworm at 17:04