Michael Pollan, In Defence of Food 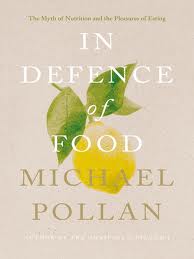 This is the first proper sentence in In Defence of Food, and to be frank, this is where the book could end if you ask me.  Ok, you might add half a page for explaining that by 'food' Michael Pollan means genuine food, not chemical-laced substitutes we are being bombarded with today.  As to the rest...  Superfluous.

Not that I think that there's anything wrong with the above advice.  Just the opposite - it's probably the best dietary tip you could get.  I just find it funny that the author criticises 'the age of nutritionism', rants about unhealthy obsession with healthy food and follows up with two hundred pages of...  nutrition gossip, dietary advice and history of food science/politics.  True, he does it only to drive his point home, and he's fully aware of his self-contradicting tendencies, but I still think that the rest of the book serves only to dilute his message.

In Defence of Food is a skinny volume, barely two hundred pages of large print.  Metaphorically speaking, it is an angry accusatory finger directed at the Western diet.

There's no escaping the fact that our food kills us (I speak as a Westerner to Westerners, I apologise to - and congratulate! - anyone not belonging to this food tradition).  I don't really need Pollan to report stories of the Aborigines going back into the wild and miraculously shedding their medical conditions to know this much.  It's enough to go outside and look around.  People in the so-called developed world do not look healthy.  Most of them are overweight or worse.  My own health deteriorated fast when I moved from Eastern Europe to Ireland some years ago.  I know people whose knees gave up at the age of 18(!) in protest against the huge weight of bodies they were forced to carry around.  I could probably fill another book with all the horror stories, but so, I'm sure, could you.

According to Pollan - and I wholeheartedly agree - this sorry state of affairs is all attributable to the industrialisation of food production.  Processed foods are the most profitable, so they get pushed onto gullible masses.  Large scale agriculture leads to nutrient deficiencies in edibles.  People gorge on empty calories and in consequence become both fat and undernourished.

Well, what is to be done?

That's the crux of it.  To find more sensible advice, track down a copy of In Defence of Food and read it.  Thoroughly.
Posted by Bookworm at 17:42