James Gleick, Chaos - The Amazing Science of The Unpredictable 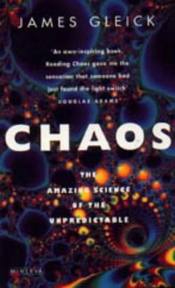 If you yearn to exercise your brain a little, here's a cool way to do it:  it is called Chaos - The Amazing Science of The Unpredictable.  The book is full of complex physics and mathematics, but after you get through it, you'll know what chaoticians do, what a strange attractor is and what's the story with all that fuss about fractals.  I call it a fair deal.

You may find reading Chaos somewhat easier if you are technically minded.  As a humanist, I found Gleick's book heavily ovetaxing my neurons, although the author visibly did all he could to ease the pain.  He did much to bring his 'heroes' (read: chaos scientists throughout the twentieth century) to life, embellishing them with all the little quirks and peculiarities that make book characters stand out in a reader's memory.  He translated all the chaos-related discoveries from scientific to human and generally demystified the discipline as much as it is possible without becoming trivial.  Thumbs up, all the way, but the book is still challenging for soft science types.

Not that the challenge cannot be overcome.

Chapters are organised chronologically, from the first, tentative forays into chaotic territory all the way to today, when chaos as a science is not only recognised, but also trendy.  It is interesting to meet all the individuals who went against the established rules of their academic fields and searched for ordered patterns in the midst of apparent randomness.  If Gleick is to be believed, looking for chaos took some guts once upon a time!

Even if you're not a fan of rebellious scholars, chaotic sciences are quite fascinating.  Some compare them to relativity and quantum physics in importance so maybe it's good to pick up the basics, even if it makes kicking brain into a higher gear unavoidable.

I, for one, finished it with a feeling that little mathematics from time to time won't kill me.
Posted by Bookworm at 19:23