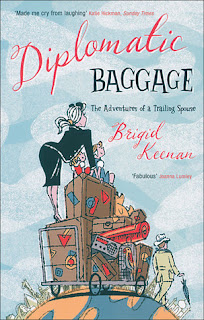 Diplomatic Baggage is an autobiography of a diplomat's wife.  Not any particular diplomat's, since the man in question is never mentioned by name (you could probably track him down based on what's in the book, but who would bother?).  It was written, presumably, to make the world aware of the hard lot of trailing ambassadorial spouses.  Those servants, never good enough.  All the dinner parties to host - what a nightmare!  The terrible hardship of being a stay-at-home mum or wife, without worrying how to pay the bills.  The burden of being posted all over the world, expenses paid.  And those houses!  They may have eleven rooms, but the upholstery is all wrong!  My heart bleeds, indeed.

If I ever met Brigid Keenan, we would hate each other instantly.  She would probably ask me if I'm sure I got the right door (servants' entrance being elsewhere) and I would mutter something about snobs and rich useless people, perhaps even adding a few unpublishable comments.  Yes, I'm uncouth, hardly civilised at all.  I can't even comprehend the tragedy of wearing the wrong jacket to an official function.  The boorish me...

I know I'm being nasty, but it's the author's own fault.  She asked for it, she really did, mixing complaints about the curtains with stories of Ethiopian famine.  Most of the time, Mrs Keenan appears likeable enough, in the silly, chatty, girlie way but there were moments in the book where my jaw simply dropped and my mind went blank with incomprehension.  Like sending small children to a boarding school on another continent and then wondering what the hell went wrong when they rebelled (a tip - have my parents done something like this, I would not be on speaking terms with them ever again.  And no, I'm not a teenager, thank you very much).  Or stopping the car to help a stranger who collapsed on the street and then refusing to take him to a hospital because... wait for it... he was covered in snot.  My goodness, while such blunders happen to most of us at some stage, writing about this in a book for the whole world to see is either extremely brave or extremely foolish.

Having said that, I did enjoy Diplomatic Baggage.  It's funny, engaging, chatty in the 'girls gossiping' style, full of well-written anecdotes.  The Keenans' itinerary is indeed impressive:  Ethiopia, Belgium, Trinidad, Bermuda, India, Gambia, Syria, Kazakhstan...  I officially writhe in envy.

Despite such a colourful bouquet of destinations, I wouldn't really place the book in the 'travel writing' section, like my library did.  It belongs to 'autobiography', maybe 'lifestyle' shelf.  'Travel writing' is what Dervla Murphy does.  Mrs. Keenan... well... I'll just shut up, shall I?
Posted by Bookworm at 14:22