Dervla Murphy, South From The Limpopo 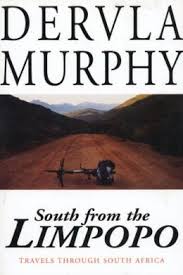 I'm really getting closer to my self-appointed goal of reading all of her books.  Yay!

South From The Limpopo is one of the more voluminous titles in Dervla's repertoire.  At over four hundred pages, it is about a third longer than her 'standard'.  It is presumptuous to claim to know the writer's mind, but I suspect there are at least two reasons for the book's XL size.  Primo, it describes a three-stage journey (in other words, Dervla kept returning to her destination).  Secundo, South Africa is 1993/94 really was a special place.

SA's transition from apartheid to democracy (I'm using the word in a very specific sense, which will become clear if you read the book) was doubtlessly one of the more monumental changes in recent history.  Arguably, the universal elections of 1994 could be described as the highest point of the struggle.  Dervla Murphy witnessed the event.  She'd been cycling around the country in months leading to and following the actual voting, too.  What emerges is a fascinating triptych of before-during-after of South African metamorphosis.

Travelling on a bicycle and preference for low-profile accommodation gives the author unusual perspective (probably the most precious element in ALL of her books).  She mixed with all sorts of people, black, white, coloured, rich, poor, tolerant, fanatic, you name it.  As usually, she's slow to condemn and generous in empathy, but she managed the trick without compromising her integrity.  In the environment as incandescent as that of South Africa AD 1994, this was quite an achievement.

Inevitably, South From The Limpopo is darker than the usual Dervla Murphy fare (with the exception of blood-curdling Visiting Rwanda).  South Africa was (is?  I wonder...) a violent, chaotic place and some of the author's anguish is contagious.  Not that she herself was a victim of aggression - despite numerous warnings, she was the focus of only one minor 'incident'.  What she saw is another matter.  Nah, I won't be picking South Africa as my holiday destination any time soon (not that I ever could afford to, haha).  It's funny, usually I'm dead keen on seeing places Murphy writes about but this time...  nope, not a twinge.

I wonder how much things have changed since 1994.
Posted by Bookworm at 13:35