Steven Mithen, After the Ice 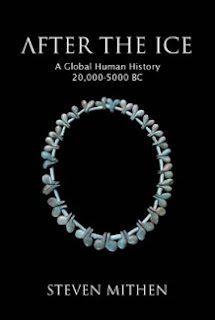 Not much was happening on planet Earth then, at least not much by our hyper-speed-information-overload standards.  Agriculture was getting invented, animals domesticated, continents colonised, sea levels fluctuated like a see-saw, but generally speaking, life was pretty straightforward.  Find food, find shelter, don't get killed*.

Steven Mithen is thorough in his examination of the Stone Age world.  His imaginary protagonist, named after a Victorian scholar, John Lubbock, travels in space and time across all the inhabited continents, visiting famous archaeological sites from the chosen period when still in use.  Inevitably, much of the story is pure conjecture, but the imaginary parts are always followed with scholarly arguments in support of the visions.  I'm not in a position to judge scientific reliability of After the Ice, but it looks serious enough.  Any controversial material is heavily footnoted, research properly credited etc.

Frankly, you need to be really interested in early human history to get through more than a hundred pages of the book without getting somewhat bored.  I, for one, turned the last page with relief.  Mithen tried hard to make After the Ice appealing to the general public, using his imaginary observer to 'write a narrative about human lives rather than a catalogue of archaeological finds'.  Did he succeed?  To my eye, there's still too much catalogue in there, but well done for trying.  Ultimately, the journey still leads from excavation to excavation, although adding the imagined landscapes and lifestyles helped to break the monotony.

Writing a history of early post-glacial period is problematic in any case.  It's like guessing what's on a huge picture puzzle when you have only two or three pieces to work on.  Despite archaeologists' best efforts, very few artifacts from the past survive to give us any clues as to how the early humans lived.  Just imagine the amount of time between now and even the most recent of Mithen's dates; it's like going back to the Romans and then as far back again, twice.  All that we have to account for such a huge chunk of time is a handful of stone tools and a charred bone or two...  I'm exaggerating, but only slightly.

Nevertheless, it is fascinating to see where we came from.  Homo sapiens today, with our wars and nation states, computers, lasers and all other toys, started as a humble hunter-gatherer.  I could think of less user-friendly introductions to our past than Mithen's.

*In my gloomier moments I believe that this sums up the human condition rather nicely, but those who think that owning the latest iphone equals happiness will probably disagree.
Posted by Bookworm at 01:13